Javascript in action: Under the hood 🧐

Javascript is a popular programming language with many peculiar behaviours which can sometimes blow your mind.

But if you get to know how it works under the hood, you will just love it resulting in a master of it. To really understand its working, two thing needs to be clearly understood.

1. Everything in Javascript happens inside an Execution Context 📦

Now, what is this Execution Context that came in between you, me and Javascript?

Don't worry, that is the main hero of this blog. Let me get introduce it to you.

You can think of Execution Context as a box divided into two compartments, namely, Memory and Code. The memory compartment consists of all variables and function definitions that are defined in your program as key-value pairs. It has also a good name which you can call i.e., Variable Environment. The second compartment is known as Code Execution or Thread of Execution, where your Javascript code executes line by line.

2. Javascript is a synchronous single-threaded language🧵

This means that Javascript can run a single line of code at a time and only after its completion, it can move to the next line of code for execution.

Enough theory, let's get into some visualization.

I'm going to consider this block of code for the explanation -

This is what you write in your code editor. Now, let's see how this is interpreted by the JS Engine. As soon as this code is run, an execution context is created. Basically, there are two phases that go on inside this execution context.

This is how execution context looks like on a browser. 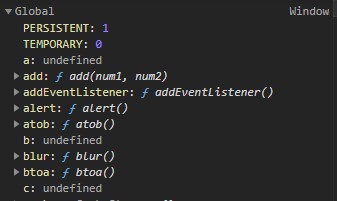 One thing to be noticed here is that Javascript stores the entire function code itself as a value. Interesting right? I hope this visualization makes a much clearer view of the execution context. Let us carry on.

Line 1: Javascript encounters a variable named a having a value of 20. So it goes to the variable environment and updates the value of a from undefined to 20. This looks something like this - 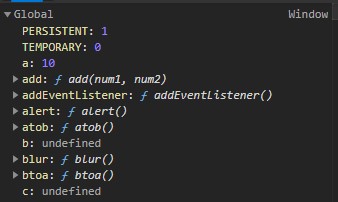 Line 2: Same goes for the variable b. It is updated from undefined to 10.

Line 3: Javascript sees a function block and will skip it from line 3 to line 5.

Line 7: Javascript encounters the function invocation statement and goes back to line 3 to execute the function block.

Up to this, the GCE (Global execution context) looks something like this - 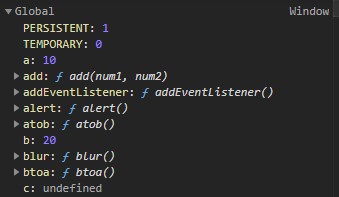 An important thing to note here is that as soon as function add is invoked, a brand new execution context is created inside the global execution context (GCE) having its own local scope. Again, this execution context will be having two components and two phases as the previous one. After memory allocation to all the function variables, the Global Execution Content (GCE) looks like -

This is the same on the browser.

Line 3: The function gets its parameters from the arguments passed to it from line 7 and initializes num1 and num2 with their updated value in memory.

Line 4: Calculations are performed and the result is stored in sum and its value in memory is updated.

Line 5: return keyword is encountered. This tells the function to return the control back to the line where it has come from. So, here it is line 7. It also says return sum which means it returns taking the value of sum along with it.

Now, as soon as this function block is executed and has returned, its execution context is completely deleted and also after the program has been completed, the GCE also gets deleted. Let us view the whole process quickly in a single shot.

This was a huge thing to understand this all.

Suppose, you have multiple nested function calls. Managing all those execution contexts one after another will be a tedious task. So how Javascript handles this do you know? This is going more interesting now.

Javascript uses a stack to manage all the execution context which is popularly known as the call stack. Other names are -

Hope this article was helpful 😊. If so, then do give a reaction and share with others. What to add something? Write it in the comments 👇

Whether you have an idea for a project or just want to say hi, feel free to shoot me an email!